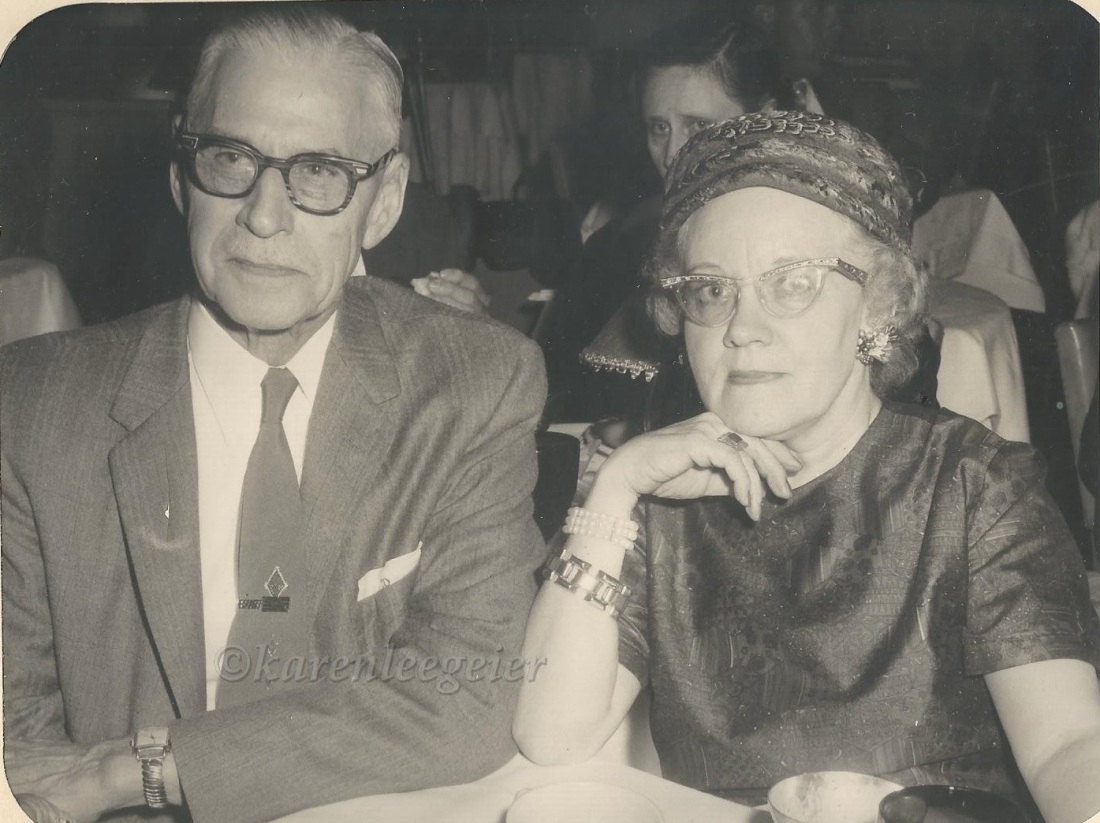 When you “solve” a mystery

You’ve downed gallons of coffee, torn out your hair, checked and rechecked sources, searched for family members, made contact, but…

Face it: You’re addicted and you HAVE TO KNOW. You cannot let it go. You think about it all the time. You decide to check just one more lead…and the next time you look, another two hours has passed. “Dinner?” they ask. I say, “Schminner!” and go about my business, a testament to the pure joy and frustration genealogy has become.

This was me last year when I solved a big mystery in our family. Or, did I?

History behind the man

When I was growing up, the man I called “Uncle Bert” was actually my father’s uncle, or my granduncle, having married my grandma’s sister, Hazel. He was present during my father’s growing up years–sometimes known as the tough years, according to dad, when boys need guidance–present when dad’s father, Carl Geier, was not. Carl and my grandma Lalla divorced when dad was three, leaving dad fatherless. Bert was present to a degree.

While there was benefit to dad regarding Bert’s presence, the man himself wasn’t without suspicion. He was oddly evasive about his birth year, and had changed his name several times. The kicker was when, upon his death, Bert’s wife Hazel insisted certain papers be buried with Bert. I was eight when he passed, but Hazel’s insistence about the papers, and Bert’s mysterious ways, have not been forgotten.

I prefer to think people can change if they want to make the effort, if they want to make amends. All of the above led family to believe Bert had a mysterious past, one he may or may not have tried to rectify. One certainty is that my grandaunt Hazel was hopelessly in love with the man. Maybe she saw or knew something we did not. Regardless, in her eyes, he walked on water. 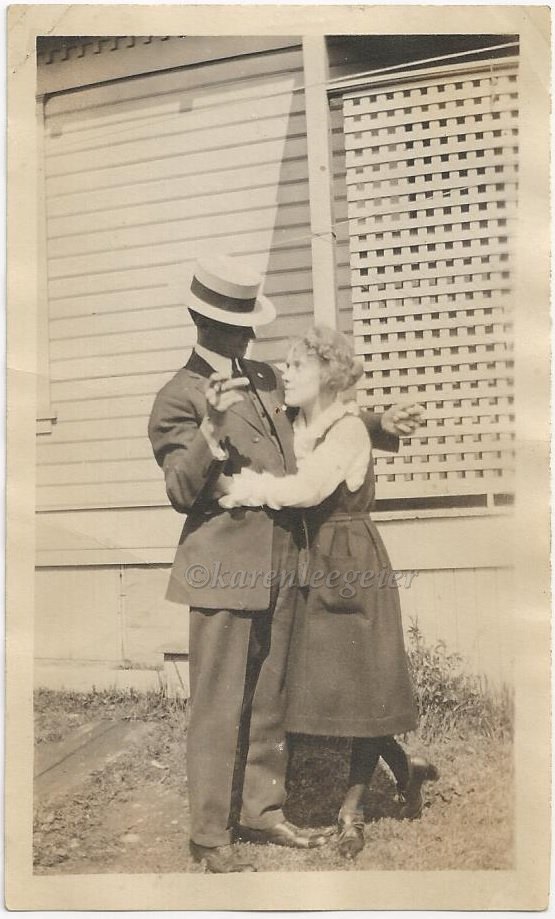 I believe these photos were taken in Tacoma around the time they married, 1927. 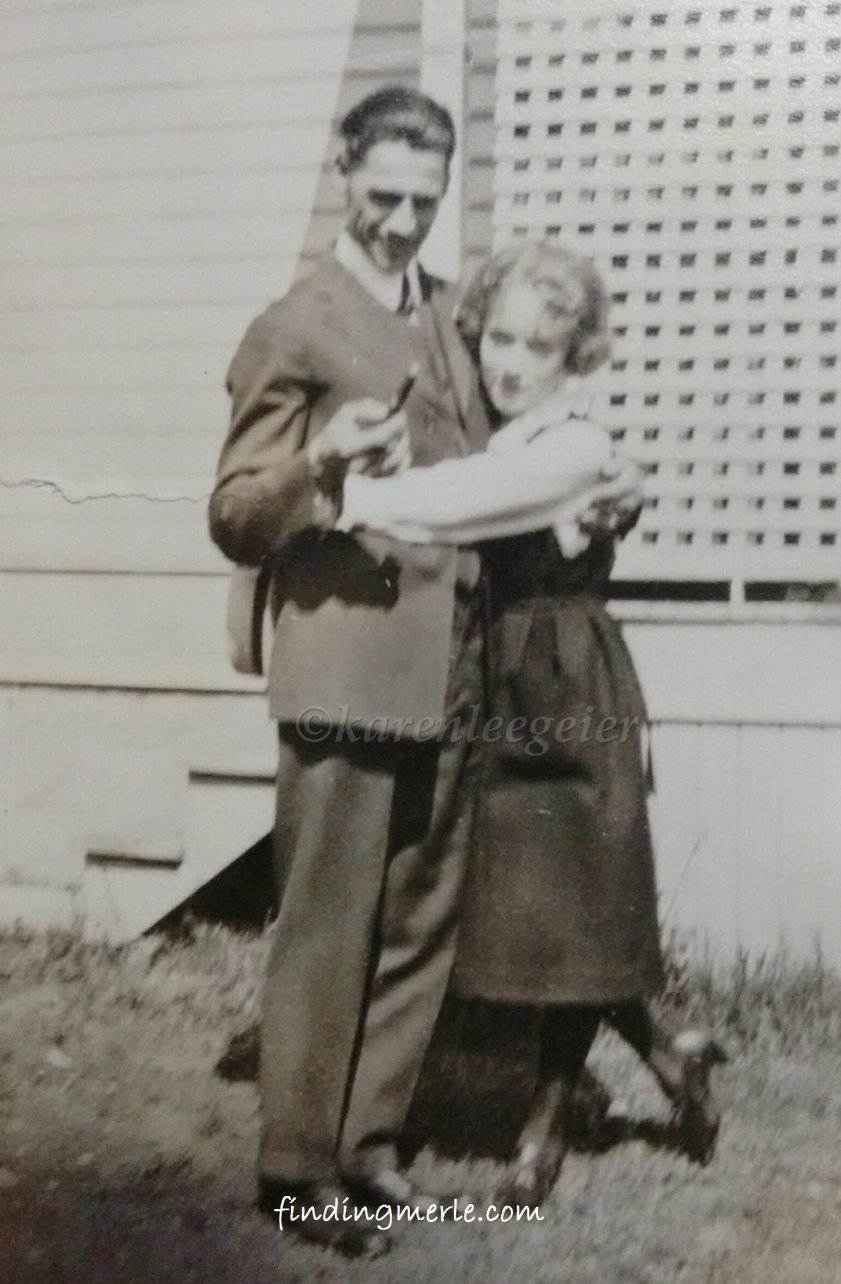 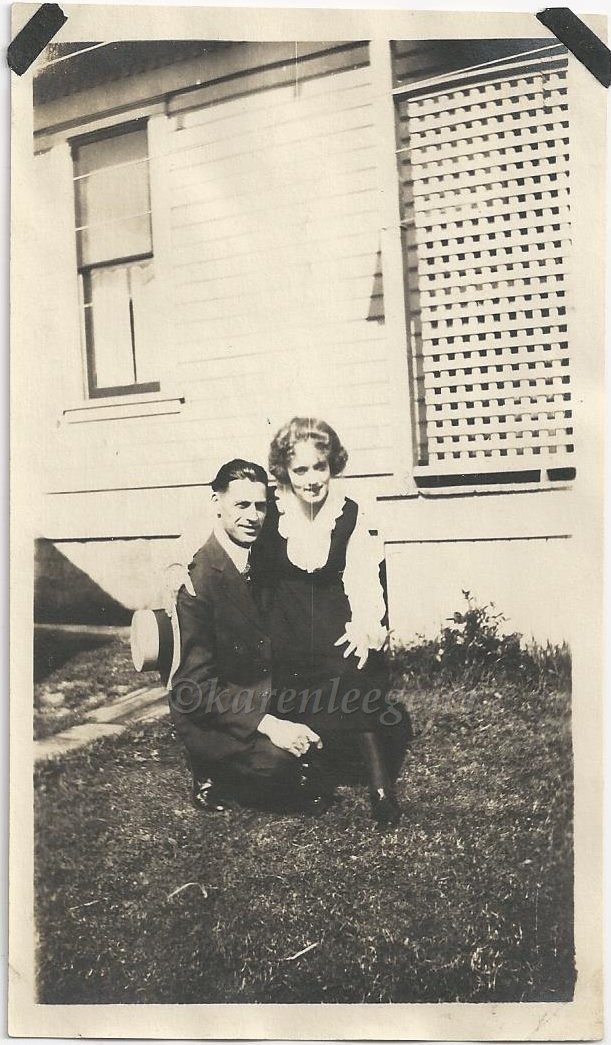 Creating the timeline, piecing it together

Gnawing at me were the consistent name changes. Unless there is something to hide, “Why,” I asked myself many times, “would a name need to be changed so often?” When I lost track of how many name changes had occurred, I decided to make a record.

Working from both ends, using every record and piece of evidence I could find, I put together a timeline of this man’s life. Here it is in full.

Note the headings at top; I listed the year, his age, the event, and the name he gave (far right column) for that year. Note the variations of the first, middle, and surnames, and how often they changed. 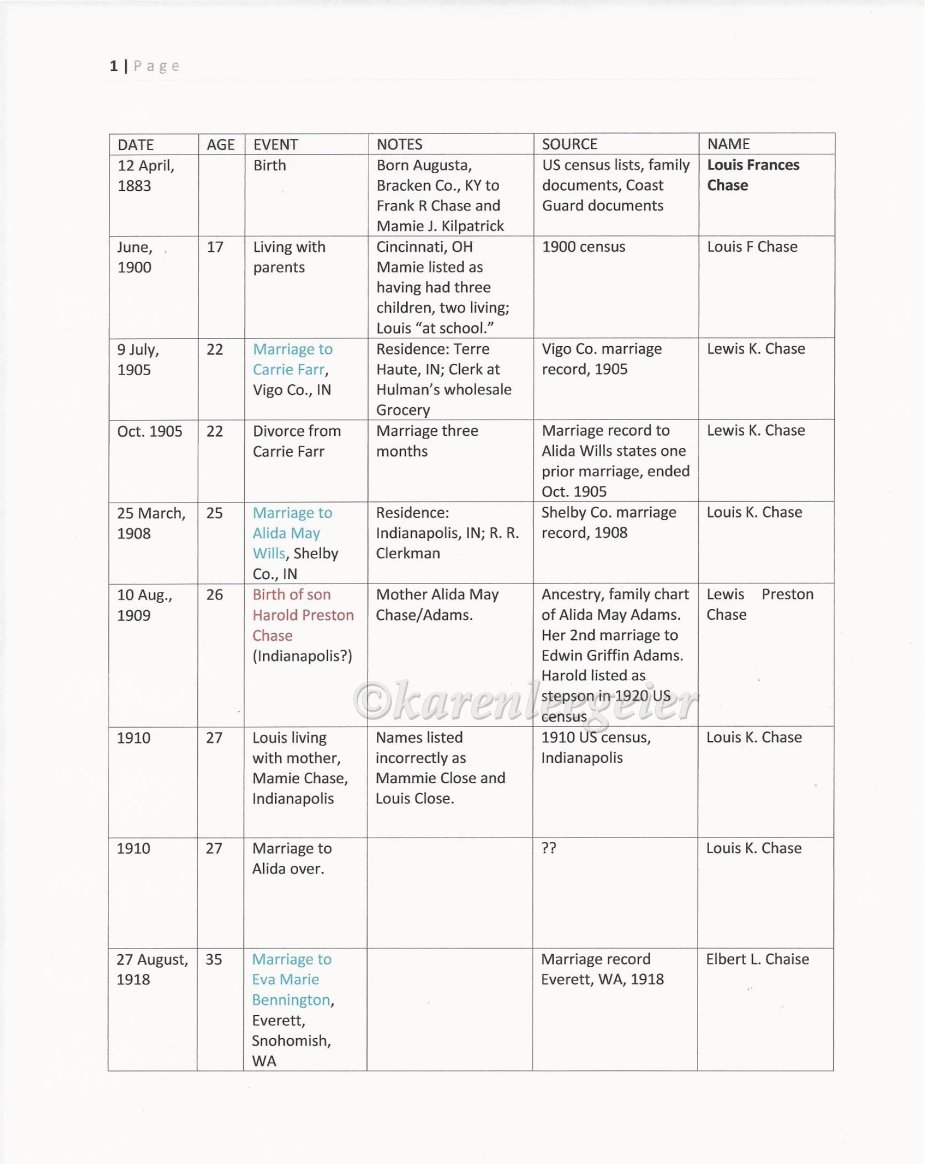 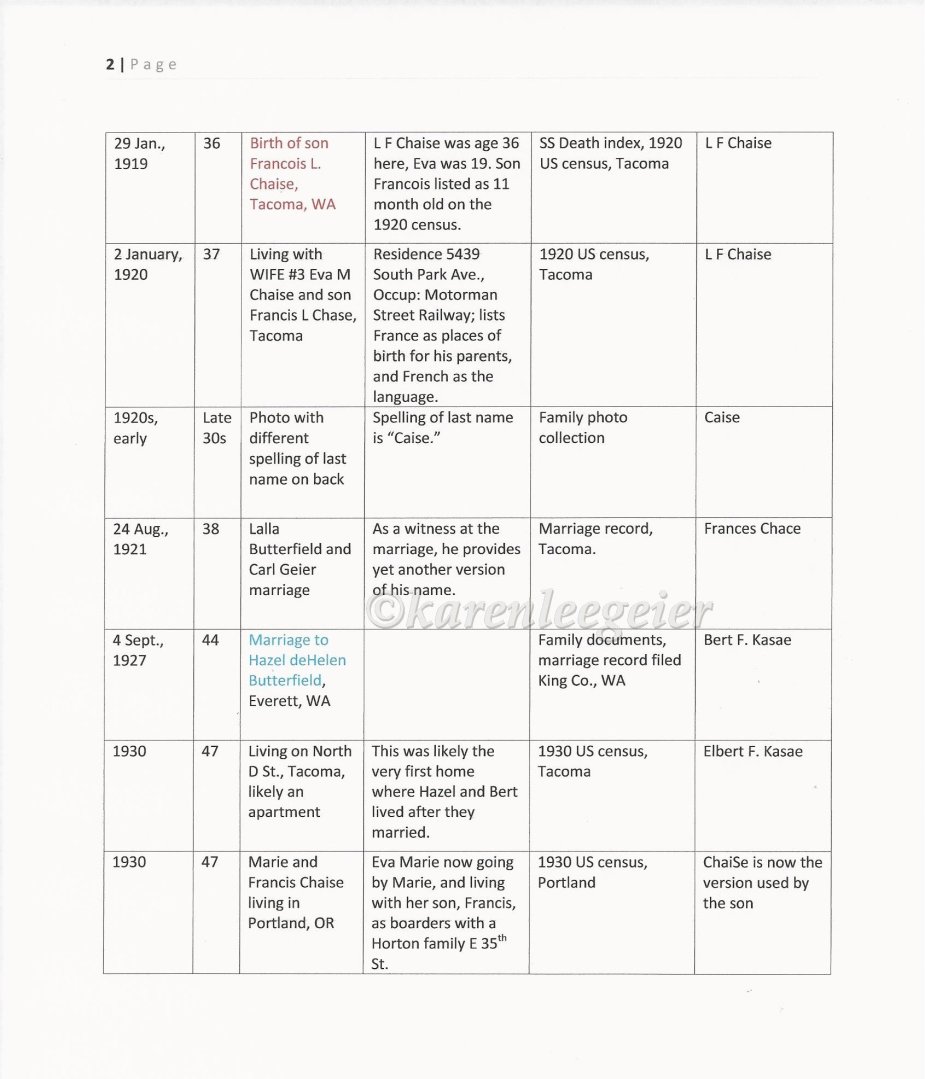 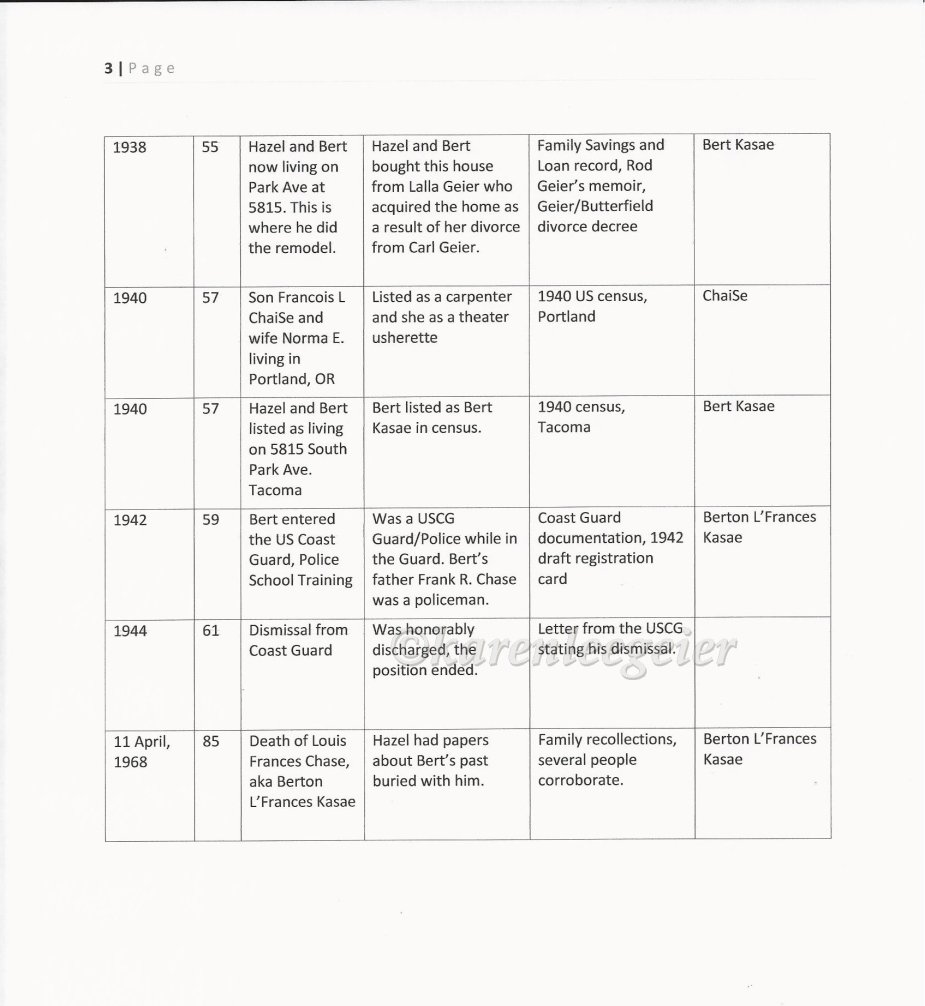 Aside from other occasions, each time he married, his name and/or the actual spelling of his name, changed:

Until I started digging, we had no idea that rather than Bert’s first wife, Hazel was his fourth. Not only was “Bert” married three previous times, it appears he fathered two sons. Harold Preston Chase was born 10 August, 1909 in Shelby County, IN (17 months after marrying Alida May Wills), and Francois L. Chaise was born 29 January, 1919 in Tacoma, WA (five months after marrying Eva Marie Bennington). Marriages are shown in blue ink, children in red.

This could be the “evidence” Hazel wanted buried. The content of those papers could be something else entirely. We simply don’t know.

Does this case appear solved?

I ask the question for two reasons. First, we must not assume that any “proof” I’ve listed in my timeline is absolute fact. Gathered collectively, I believe my “evidence” supports a strong case, but, one needs to remain open. Researchers know that the contents of any document can appear true but actually be false. Second, a cousin provided information that helped me locate the family. For reasons of their own–reasons I completely understand and do not disagree with–the family does not believe this man was their ancestor.

Back to the starting gate

I’m left with no choice but to present this case to you in hopes someone will recognize him and come forward. I feel as if the evidence supports my having solved it, yet the “family” (if they are his family) disagrees.

For now, have a closer look at the man we knew as Berton L’ Frances Kasae:

There are many more photos in our collection. If you think you might know this man, please contact me and maybe together we can figure out if there is a connection. I’m happy to return the photos to the rightful family.

Please use the contact form if you believe you have information about Louis Frances Chase.